Please consider a donation to help further our efforts in providing a memorable experience!

The WASP Museum may close early or be closed to accommodate special events hosted at the Museum.

Our Archival Team’s and Executive Director’s regular working hours are Monday – Friday, 9:00 AM – 5:00 PM.  If you wish to meet with a team member during the week or make a special Saturday appointment, please email archive@waspmuseum.org or call 325-235-0099.

If you would like to schedule a tour, please contact Christina Speck at least 2 weeks in advance at 325-235-0099 or at info@waspmuseum.org. 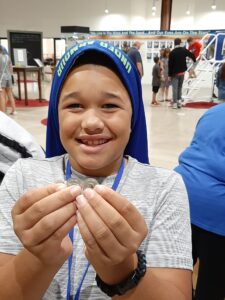 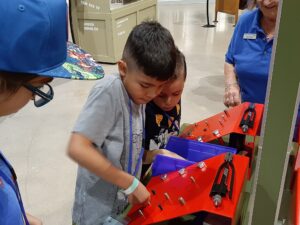 Educational Tours: Suitable for school groups, homeschool co-ops, or clubs in grades 2-12, our educational tours include interactive exhibits led by volunteers and Museum staff.  Minimum of 10 students is required.

Guided Tours: Suitable for groups of 10+ people, guided tours are led by one of our volunteers or by a Museum staff member.

After Hours: On occasion, the Museum can accommodate tours before 10:00 AM or after 5:00 PM for $5.00 per person.  Arrangements must be made in advance.

The Museum campus is located on Avenger Field which consists of 15 acres of land backing up to the Sweetwater Airport. Two hangars, a 1929 original, known as Hangar 2, and a replica of Hangar 1, used by the WASP at Avenger Field, are located on the property.

Hangar 1 holds exhibits depicting WASP leadership, the training experience, and life in Sweetwater. Additionally, it educates the visitor on duty base assignments, deactivation, fight for the veteran’s status and Legacy Pilots from the 1970s – today.  A highlight of the Museum is the WASP in the Spotlight exhibit series. Changing quarterly, this exhibit displays collections of individual WASP. Collections vary in size and scope, but all highlight their WASP and post service experiences.  Learn more about current collections here.

Guests are encouraged to visit the Wishing Well, an original structure, located between Texas State Technical College (TSTC) and the Sweetwater Airport, approximately one mile from the museum campus. This well became the focus of a pilot training tradition. When a pilot completed her first solo flight, cohorts would toss her in as a rite of passage.

WASP Families: If you wish to have your WASP ashes spread on the grounds of Avenger Field, please contact lisataylor@waspmuseum.org.

Symbols of the WASP

Why is this Tinkerbell-like creature often seen hanging around the WASP? Brought to life by author Roald Dahl and drawn by Walt Disney, Fifinella became the official mascot of the WASP. She flew with the WASP on their jackets in the form of patches and has even flown in combat with today’s female Air Force Pilots.