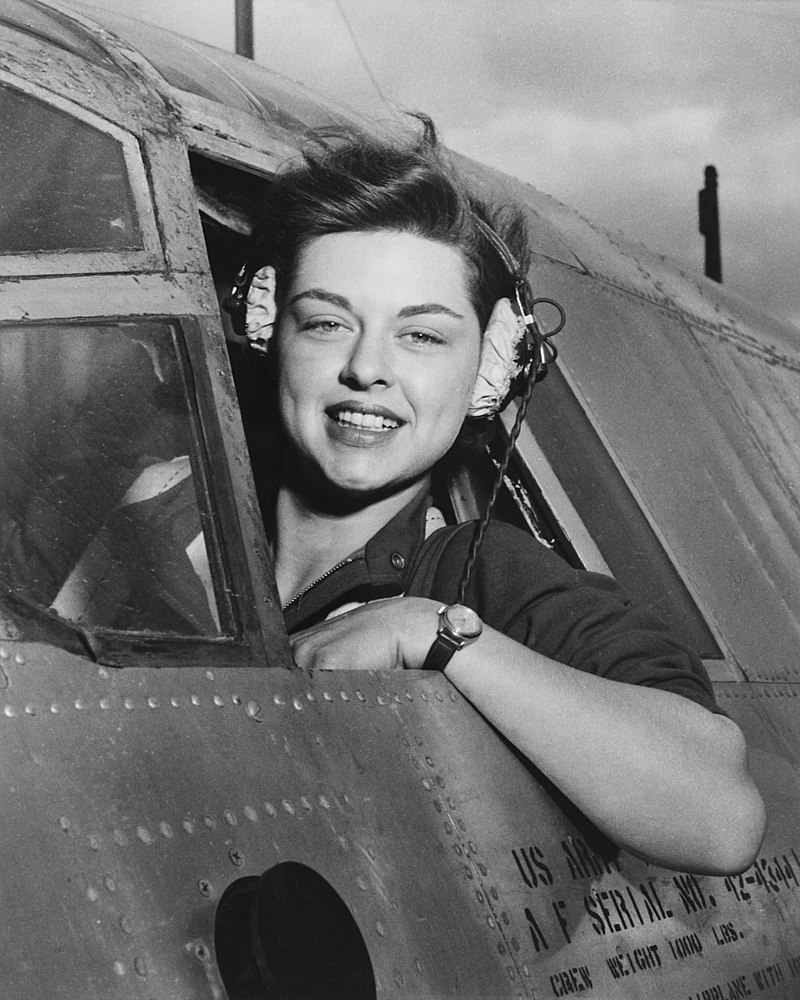 “How do they pick you girls… for your looks?” asked the Harlingen AAF base commander.

“You won’t think so after we fly for you, Sir,” replied Libby Gardner.

The black and white photograph of Libby Gardner sitting in the left seat, at the controls of a B-26 with her forearm comfortably resting on the sill of the airplane, and a smile that radiates her exuberance and capability, is one of the many iconic images of the WASP of WWII. Libby’s image also exemplifies the ‘We Can Do It!’ attitude of the 12 million women who worked in support services on the Homefront and the over 350,000 women who served in uniform during the Second World War.

On the first day that she reported for B-26 flying duty in January 1944, Elizabeth ‘Libby’ Gardner was a poised and confident 22-year-old who was eager to serve her country as a Woman Airforce Service Pilot.

Three months earlier, in October 1943, Libby successfully completed the Women’s Flying Training program in Sweetwater, Texas, and received her silver wings as a graduate of Class 43-W-6. After her graduation, Libby was selected for 3-months of transitional training in the B-26 Marauder at Dodge City Army Air Base, Kansas. After her transition into the twin-engine, medium bomber, she was assigned to the flexible gunnery school at Harlingen Army Air Field in Texas, along with seven fellow WASP from Class 43-5 and 43-6.

Over 65 years later, I sat at a table opposite Libby in the reading room of her residence in New York and listened with rapt attention as she recalled her growing up years in Rockford, Illinois, and the subsequent years leading up to that first day reporting for duty at Harlingen.

The oldest of three children, and sister to her two younger brothers, Libby was a good student and an active young adult who had a fondness for playing tennis. Her father’s younger brother, Frank, who mentored Libby and urged her to go to college, was a big influence in her life which she really came to realize and appreciate in later years. After two years of college in Jacksonville, Illinois, as an English major, Libby worked part-time doing three jobs and landed one as a secretary.

But after the bombing of Pearl Harbor on December 7, 1941, Libby was determined not to sit through the war in front of a typewriter. “I dated a boy who wanted to be in the Air Corps, but he never made it,” said Libby, “and I decided to sign up for a ground school course to get my private pilot’s license and passed all written tests before ever sitting in an airplane.”

Libby then sought a job at Piper Aircraft learning that if she worked there she could join a flying club and pay very little for flying lessons. So, in the Spring of 1942, Libby boarded a train to Lockhaven, Pennsylvania to work at the Piper factory in the inspection department for $12 a week.  There, she saw the process of building private aircraft, following the assembly line, walking onto the airport, and across to the compass rose with inspection tags. “It was a wonderful job,” said Libby. After 12 hours of flight instruction, she soloed.

Answering the call for women pilots to fly military aircraft on the Homefront, Libby was invited for an interview with Jackie Cochran in her Fifth Avenue office. It was Libby’s very first time in New York. Returning to Piper, she flew some more and after acceptance into the program, she went to Harrisburg, PA for the AAF physical and received a telegram to report for training in April of 1943. Borrowing luggage from a friend, she got on a train and headed for Sweetwater, where over the next six months, Libby completed all phases of training and received her silver wings, personally handed to her by Jackie Cochran.

In October 2009, Libby recounted the rest of her story to me; her experience with training and eventual service in the B-26; her life after the WASP. In the days and years since I personally recorded Libby Gardner’s oral history, I remain deeply honored to have collected it and to get to know Libby prior to her passing in 2011. Today, I share it with the National WASP WWII Museum in Sweetwater… for Sweetwater is the home at which it belongs. CAVU Libby.