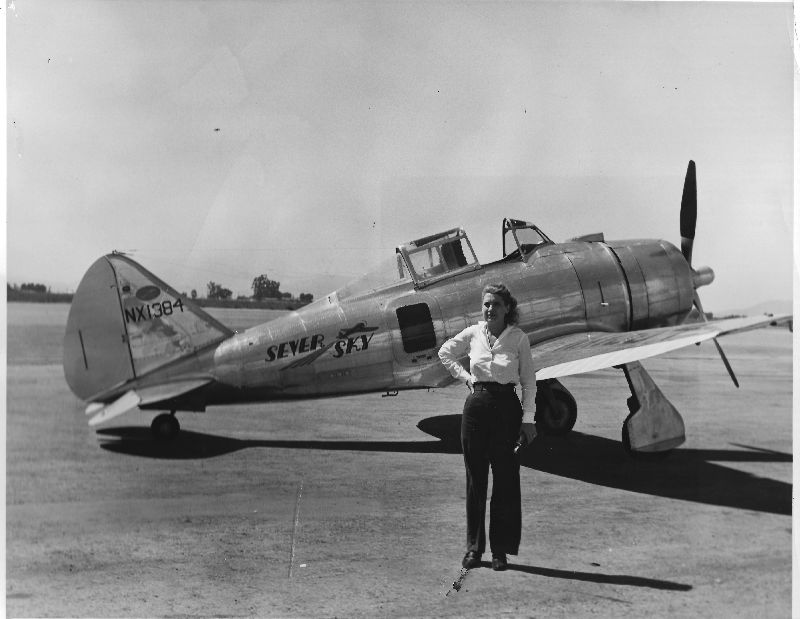 Nancy & Jackie, Before the WASP:

In 1932, Nancy Love earned her limited commercial license at Roosevelt Field, where she frequently flew from in her early years before the WASP. That same year, Roosevelt Field was the place where Jackie Cochran’s storied flying career literally took off from.

In 1906, Bessie Pittman, the aviator now known as Jacqueline ‘Jackie’ Cochran, was born in a lumber mill town in the Florida panhandle. Moving from one town to another with her family in search of work at the sawmills of the South, Bessie owned a remarkable amount of ambition as a child. She left home at a young age to pursue greener pastures and reinvented herself by taking the name Jacqueline Cochran which, according to her own accounts, signified her personal break from the past.

After studying to be a nurse, Jackie got a job in a beauty shop and moved to New York in 1929 to seek further opportunities in the industry. Working as a beautician for the highly fashionable Antoine’s salons at Saks Fifth Avenue and Miami Beach, Jackie climbed the social ladder.

At a dinner in 1932, Jackie met wealthy financier Floyd Odlum (later to be her husband). That evening, in conversation, she shared with him her desire to go on the road to sell cosmetics and launch her own business. Floyd suggested (out of practicality and the country’s economic depression) that if Jackie were ever to meet her dream of starting her own cosmetics company, that she would need wings to cover enough territory and earn enough money to outdo her competition.

Jackie took Floyd’s advice to heart, and in the summer of 1932, she enrolled for flying lessons at the Roosevelt Aviation School on Long Island. With the intent to obtain her pilot’s license in a mere three weeks, Jackie took the six weeks of vacation that she had accumulated at Antoine’s and set out to do just that. At the start of her vacation in July, she boarded a train to Westbury via the Long Island Railroad where she met chief instructor, Husky Lewelleyn at Roosevelt Field. There, she took flying lessons in a Fleet Model 2 with a 90 hp Kinner K-5 engine and a top speed of 110 mph. The Fleet was the primary flight trainer used at the Roosevelt Aviation School. Within days Jackie soloed, and on August 17 she earned private pilot’s license # 1498 after only three weeks of lessons. She later received advanced training at the Ryan School of Aeronautics and obtained her instrument rating, her commercial, and her transport license.

Early in her flying career, Jackie was captivated with air racing and during the early to mid-1930s she entered as many races as possible. In 1935 she established Jacqueline Cochran Cosmetics and entered her first Bendix Race, winning third place overall.

In 1937, Jackie was back at Roosevelt Field running fuel consumption tests on a new engine installed in a Beechcraft that she was going to fly in the next Bendix race. Russian émigré, war ace, and aircraft innovator, Major Alexander de Seversky, asked Cochran if she would, instead, fly a P-35 pursuit manufactured by his company, the Seversky Aircraft Corp. of Farmingdale, Long Island.

Jackie’s hopes of winning first place in the Bendix soared with the prospect of flying the P-35 and in a couple of weeks after her first test flight in the airplane; she pushed the pursuit up to near 300 mph. Ultimately, her dream of winning the top prize in the prestigious Bendix competition arrived in September 1938 when she flew a Seversky AP-7 (an improved civil version of the P-35) between Burbank, California, and Cleveland in 8 hours, 10 minutes, 31 seconds.

Prior to, and following, this feat, Jackie’s racing skills and record-breaking flights in the 1930s won her wide acclaim and in 1937 she was awarded the first of many Harmon National & International Trophies as the outstanding woman flyer in the world.

In the years preceding 1941, when the ominous clouds of war gathered on the horizon, Jackie logged many hours of flight time and experience into her logbook….countless hours of experience that originated from, and concluded, upon the runways at the historic Roosevelt Field. And for Jackie, it all began in a yellow-winged Fleet 2 trainer at the Roosevelt Field School of Aviation on the Hempstead Plains of Long Island- in the decade before the WASP.